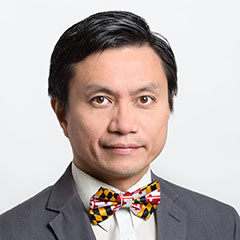 He contributed in protein domain parsing and boundary prediction at the National Cancer Institute (NCI), National Institutes of Health (NIH) from 2004 to 2005. He was a fellow focusing on human genetics and genomics at the National Center for Biotechnology Information, National Library of Medicine, NIH from 2009 to 2012. He became a special volunteer working on computational modeling for cancer progression and metastatic at the NCI, NIH from 2012 to 2013. He was also affiliated with the Center for Bioinformatics and Computational Biology and the Institute for Advanced Computer Studies at the UMD.

He is currently a faculty of Information Systems at the Robert H. Smith School of Business at the UMD since 2012. His research interests include information integration, data management and mining, literature-based discovery, performance simulation and evaluation, bioinformatics and computational biology, human genomics and genetics, and cancer biology. He has two US Patents and is a member of the ISCB and the ISENG.